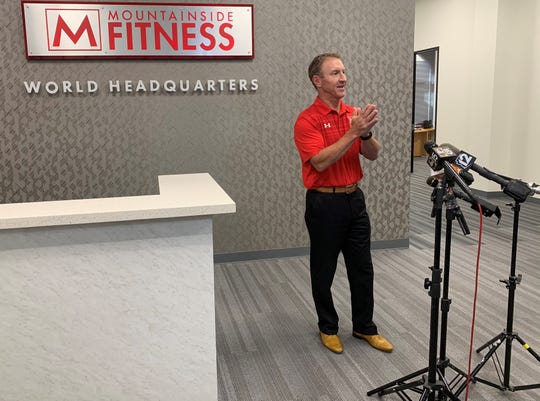 Gov. Doug Ducey is in a showdown with many Arizona gyms that are refusing to follow his Monday executive order that they close until at least July 27 to help slow the spread of COVID-19 as hospitals near their capacity to care for everyone who gets sick.

Ducey also ordered the closure of bars that don’t serve food and water parks, but gyms are putting up the loudest resistance, even though some already have been fined for defying the order.

First was Mountainside Fitness, which declared soon after the governor’s news conference that the chain would sue to remain open. Many other gyms followed Tuesday saying they would defy the order, including the EōS and Life Time chains across the Phoenix metro area.

“It’s not about Mountainside,” CEO and Founder Tom Hatten said Tuesday. “It’s about business and our choices and our civil liberties and where our leadership is taking us at this point in time.”

The governor’s office emphasized on Tuesday that the order will be enforced.

“The governor’s executive order is clear,” Ducey’s spokesman Patrick Ptak said. “Gyms and other indoor fitness clubs or centers, regardless of size, shall pause operations until at least July 27. This is a public health issue, particularly among our younger demographic, and we are looking for cooperation and compliance from our business community in the name of public health. We know this is a sacrifice.”

Ptak said cities can cite businesses and suspend any license they hold in the municipality. He said it is enforceable as a Class 1 misdemeanor punishable by a fine of as much as $2,500.

“Our office has talked with law enforcement from around the state and local leaders,” Ptak said. “Again, we are looking for compliance, and we expect this order to be enforced.”

The July 27 reopening date Ducey referred to Monday was not set in stone, he said.

Hatten said some of the Mountainside centers already had been cited in different cities and he was willing to pay the fines to fight the order.

He would not disclose which cities, but shortly after his news conference the Scottsdale Police Department announced that a Mountainside gym in that city was notified by officers at about 9:45 a.m. that it was in violation of the order, and when officers returned after 2 p.m. and found it still open, they cited the chief operating officer with a misdemeanor.

Hatten said he did not know whether to expect repeat citations each day.

“When you feel you are in the right for why you are doing it … there could be consequences,” he said, adding he will need to appear in court in July. “I am prepared for that.”

The lawsuit mentions the extreme precautions the gyms have taken to address the pandemic, such as training employees, rearranging the layout, rescheduling classes, developing a contact-less check in and installing sanitation stations.

Gyms either are gambling that the enforcement won’t happen or are willing to pay such fines to stay in business.

“In support of the nearly 1,500 Life Time team members in Arizona clubs, we disagree with further disrupting their livelihoods after the challenging impact posed by the shutdowns in place since mid-March,” Life Time Chief Operating Officer Jeff Zwiefel said Tuesday in a message to members.

The chain of fitness centers said all Arizona locations will reopen Wednesday, including steam rooms, saunas, pools and children’s areas.

EōS gyms only planned to close for 24 hours “in respect for this mandated closure and for our governor,” CEO Rich Drengberg said in a Facebook post.

“During this time we will be seeking further guidance and clarification from the Arizona Governor’s office and furthering the position that gyms are safe, essential and should stay open,” Drengberg said.

“This is a testament to all of your dedication towards our commitment to making EōS Fitness a safe place that people can count on,” he said.

Other gyms offered their own interpretations of what the governor ordered.

“It is our interpretation that we do not fall under ‘gyms’ as we are a boutique studio with set class times allowing for full social distancing and space between each student,” Radi8 wrote on Instagram.

The governor’s order made no mention of “boutique” studios or exceptions.

Other fitness facilities, including climbing gyms, were planning to adhere to the order. Focus Climbing Gym in Mesa, for example, was closed Tuesday.

“As soon as we did make that announcement on our social media, we did have quite the influx of customers come in that night to get their last night of climbing in for potentially 30 days,” owner Joe Czerwinski said Tuesday.

“It was going to be a bumpy ride, and now it just got a whole lot bumpier,” Czerwinski said of the business challenge of closing again.

Planet Fitness said in a message to members that the chain would comply and close as ordered until further notice.

“Don’t worry, while we are closed, we’ve got your back!” the Planet Fitness statement said. “Your membership will be frozen and you will not be charged any fees while the club is closed. We will make an adjustment on your next billing cycle when your club reopens for any unused days for which you have previously paid.”

Planet Fitness also is offering home workout routines that can be streamed on YouTube and don’t require any special equipment.

Focus Climbing Center in Mesa is forced to close a second time during the COVID-19 pandemic after Gov. Ducey’s order for specific businesses.

Some of the gyms defying the executive order from the governor contend they are safe and not likely to spread the coronavirus responsible for the pandemic.

The Body Lab pilates studio in Phoenix said it was not going to close because it already is limiting attendance.

“As we have adhered to the strictest guidelines and only have six people in class at a time, we are planning on staying open with business as usual,” the gym wrote in an email to members Tuesday.

Counties in Arizona have released little information on how it has come to be that nearly 80,000 people in the state have contracted the illness as of Tuesday, other than pointing out particularly troublesome hot spots such as care facilities and the Navajo Nation.

State and county health departments have not shared anecdotes of outbreaks tied to single events such as protests, nightclubs, gyms or other large gatherings, and it’s unclear if they have the information to make such conclusions.

A gym in West Virginia is believed to have exposed 205 people to the virus this month, according to the county health department there. A patron tested positive, according to health officials, and anyone who visited the Morgantown Planet Fitness from 9 a.m. to 3 p.m. June 24 was asked to quarantine for 14 days.

Research from the Centers for Disease Control also shows that gyms can spread the virus. In South Korea, for example, 112 people are believed to have contracted COVID-19 after a Feb. 15 Latin dance instructor workshop.

A person attending that event but not showing symptoms is thought to have infected several dance instructors, who in turn passed the illness to dozens of students at different studios.

“Intense physical exercise in densely populated sports facilities could increase risk for infection,” says a report on the outbreak written by experts who assisted with contact tracing patients from that event. “Vigorous exercise in confined spaces should be minimized during outbreaks.”

Several counties, including Maricopa, said they had no specific cases tied to gyms because the virus is now widespread in the community, making it difficult to discern where a person may have picked it up.

“We do know that in those settings it is often difficult to social/physical distance and wear masks, which increases risk,” said Ron Coleman, a public information officer for Maricopa County.

Updated at 11:09 p.m. ET Illinois moves into the next phase of its reopening plan on Friday. The guidelines allow movie theaters, zoos, museums and health and fitness centers to reopen with limited capacity. Restaurants will be able to offer in-door dining and gatherings of 50 people or fewer will be permitted. Schools and child […]
Read more
August 6, 2020 donutjam

New York, Aug. 06, 2020 (GLOBE NEWSWIRE) — Reportlinker.com announces the release of the report “Saudi Arabia Wearable and Audio Devices Market – Growth, Trends, and Forecasts (2020-2025)” – https://www.reportlinker.com/p05948978/?utm_source=GNW However, limited battery life and security concerns could hinder the adoption of wearables.? – The market for wearables in the country is also driven by […]
Read more
June 22, 2020 donutjam

Jason Nichols, facilities operation manager, disinfects equipment at the Life Time Biltmore as it opens for business after being closed due to the coronavirus Monday, May 18, 2020, in Phoenix. Big-box gyms and local fitness studios are reopening under a patchwork of protocols based on state and local guidance, but most are following […]
Read more